READ ALL AT
http://worlddrugtracker.blogspot.in/2013/12/ledipasvir.html
Posted by DRUG PATENTS INTERNATIONAL at 20:09 No comments:

Email ThisBlogThis!Share to TwitterShare to FacebookShare to Pinterest
Labels: LEDIPASVIR

'via Blog this'
Posted by DRUG PATENTS INTERNATIONAL at 01:47 No comments:

Email ThisBlogThis!Share to TwitterShare to FacebookShare to Pinterest
Labels: LOSARTAN

New Drug Approvals « All you want to know about Drugs, live, by DR ANTHONY MELVIN CRASTO, Worlddrugtracker, Helping millions, 6 million hits on google, pushing boundaries, one lakh plus connections worldwide, my soul in action for you round the clock, dedicated to my family, only live blog in the world, 125000 plus VIEWS achieved in 174 countries……………………………………… Please do not wait, just scroll down the page to view contents

New Drug Approvals « All you want to know about Drugs, live, by DR ANTHONY MELVIN CRASTO, Worlddrugtracker, Helping millions, 6 million hits on google, pushing boundaries, one lakh plus connections worldwide, my soul in action for you round the clock, dedicated to my family, only live blog in the world, 125000 plus VIEWS achieved in 174 countries……………………………………… Please do not wait, just scroll down the page to view contents:

'via Blog this'
Posted by DRUG PATENTS INTERNATIONAL at 01:47 No comments:

'via Blog this'
Posted by DRUG PATENTS INTERNATIONAL at 01:50 2 comments:

Email ThisBlogThis!Share to TwitterShare to FacebookShare to Pinterest
Labels: RALTEGRAVIR

'via Blog this'
Posted by DRUG PATENTS INTERNATIONAL at 01:49 No comments:

Email ThisBlogThis!Share to TwitterShare to FacebookShare to Pinterest
Labels: PITAVASTATIN

Posted by DRUG PATENTS INTERNATIONAL at 04:40 No comments:

Email ThisBlogThis!Share to TwitterShare to FacebookShare to Pinterest
Labels: FLIBANSERIN

'via Blog this'
Posted by DRUG PATENTS INTERNATIONAL at 04:18 No comments:

Email ThisBlogThis!Share to TwitterShare to FacebookShare to Pinterest
Labels: rivastigmine 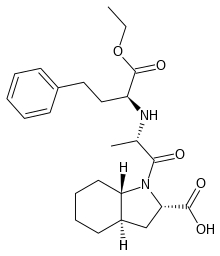 Launched-1993
Trandolapril is a non-sulhydryl prodrug that belongs to the angiotensin-converting enzyme (ACE) inhibitor class of medications. It is metabolized to its biologically active diacid form, trandolaprilat, in the liver. Trandolaprilat inhibits ACE, the enzyme responsible for the conversion of angiotensin I (ATI) to angiotensin II (ATII). ATII regulates blood pressure and is a key component of the renin-angiotensin-aldosterone system (RAAS). Trandolapril may be used to treat mild to moderate hypertension, to improve survival following myocardial infarction in clinically stable patients with left ventricular dysfunction, as an adjunct treatment for congestive heart failure, and to slow the rate of progression of renal disease in hypertensive individuals with diabetes mellitus and microalbuminuria or overt nephropathy.
Trandolapril is an ACE inhibitor used to treat high blood pressure, it may also be used to treat other conditions. It is marketed by Abbott Laboratories with the brand name Mavik.
Tarka is the brand name of an oral antihypertensive medication that combines a slow release formulation of verapamil hydrochloride, acalcium channel blocker, and an immediate release formulation of trandolapril, an ACE inhibtor. The patent, held by Abbott Laboratories, expires on February 24, 2015.
This combination medication contains angiotensin-converting enzyme (ACE) inhibitor and calcium channel blocker, prescribed for high blood pressure. US4933361 describes a process for the synthesis of trandolapril wherein the racemic benzyl ester of octahydro indole-2-carboxylic acid is reacted with N-[1-(S)-ethoxy carbonyl- 3- phenyl propyl]-L-alanine (ECPPA), to get racemic benzyl trandolapril, which is purified using column chromatography to get the 2S isomer of benzyl trandolapril, which is further debenzylated with Pd on carbon to get trandolapril as a foamy solid. This process has certain disadvantages, for example the product is obtained in very low yield. Purification is done using column chromatography, which is not suitable for industrial scale up.

WO9633984 discloses a process in which N-[1-(S)-ethoxy carbonyl-3- phenyl propyl]-L- alanine is activated with N-chlorosulfinyl imidazole, to get (N-[I-(S) N-[1-(S)-ethoxy carbonyl-3-phenyl propylj-L-alanyl-N-sulfonyl anhydride and which is further reacted with silyl-protected 2S,3aR,7aS octahydro indole 2-carboxyIic acid to obtain trandolapril. The main disadvantages of this process are that the silyl-protected intermediates are very sensitive to moisture, the process requires anhydrous conditions to be maintained and the solvent used has to be completely dried. It is very difficult to maintain such conditions on an industrial scale, and failing to do so leads to low yield of product.

The processes for preparing N-[1-(S)-ethoxy carbonyl-3-phenyl propyl]-L-alanine N- carboxyanhydride which is used in the process of the present invention are well known and are disclosed in JP57175152A, US4496541 , EP215335, US5359086 and EP1197490B1. Trans octahydro-IH-indole-2-carboxylic acid and its esters are the key intermediates in the synthesis of trandolapril. When synthesized, trans octahydro-1 H-indole-2-carboxylic acid is a mixture of four isomers, as shown below.

US6559318 and EP1140826 describe a process for the synthesis of (2S,3aR,7aS) 0 octahydro-1 H-indole-2-carboxylic acid using enzymatic resolution of its nitrile intermediate. Enzymatic resolution involves many steps and also requires column chromatography for purification making the process uneconomical industrially.

WO2004065368 describes the synthesis of (2S,3aR,7aS) octahydro-1 H-indole-2- carboxylic acid benzyl ester by resolution using 10-D-camphor sulphonic acid to prepare trandolapril. This process gives poor yields because the product has to be first resolved and then the ester is deprotected leading to further loss in yield, making the process low yielding and expensive.

W 02005/051909 describes a process for the preparation of trandolapril, i.e. (N-[I-(S)- carbethoxy-3-phenylpropyl}-S-alanyl-2S,3aR,7aS-octahydroindol-2-carboxyIic acid} as well as its pharmaceutical acceptable salts, using a racemic mixture of trans octahydroindole-2- carboxylic acid with the N-carboxyanhydride of {N-[1-(S)-ethoxycarbonyl-3-phenylpropyl}- S-alanyl (NCA) in a molar ratio of 1 :1 to 1.6:1 in a mixture of water and water-miscible solvent to obtain a mixture of diastereomers of trandolapril. The diastereomers are converted to salts which upon repeated crystallization from acetone and water, and reaction with a base gives pure trandolapril. Thus, the condensation reaction in the presence of water and a water-miscible solvent is not stereoselective.
The processes for preparing N-[1-(S)-ethoxy carbonyl-3- phenyl propyl]-l_-alanine N- carboxyanhydride starting from N-[1-(S)-ethoxy carbonyl-3- phenyl propyl]-L-alanine (ECPPA) are well known and are disclosed in JP57175152A, US4496541 , EP215335, US5359086 and EP1197490B1
The angiotensin-converting enzyme (ACE) inhibitor trandolapril is commonly prescribed as a cardiovascular drug for the control and management of mild to severe hypertension Chigh blood pressure) and may be used alone or in combination with diuretics or other antihypertensive agents. Administration of trandolapril is typically oral at a level of around 0.5-4 mg once a 15 day and may also be used in the management of conditions such as heart failure and left ventricular dysfunction following myocardial infarction.

Trandolapril itself is a prodrug, being converted to the  acid form "trandolaprilat" in vivo. It is, however, • generally desirable to prepare and administer the ester form.. The structures of trandolapril and trandolaprilat ' are shown below.

Trandolapril Trandolaprilat
Various methods for the synthesis of trandolapril and related compounds have been proposed but each of these suffers from drawbacks . Frequently the syntheses require the use of dangerous reagents, which make industrial scale preparation hazardous and difficult and/or involve multiple steps resulting in a long and complex synthesis . One of the most important steps in the synthesis is the formation of the trans-fused octahydroindole ring, which is often difficult to separate from the cis-fused equivalent.

A number of the known synthetic routes to trandolapril proceed via the key intermediate (2S, 3aR,7aS) -octahydro,-lH-indole-2-carboxylic acid. This contains the key trans-fused octahydroindole ring and the correct stereochemistry for the carboxylic acid group at the 2-position. Frequently, these methods require the separation of the cis- and trans-fused rings and, in many cases, resolution of the carboxylate group at the 2 -position is necessary. Where production of the trans-fused ring junction has been possible without generating significant quantities of the cis-product, the syntheses have been long and/or required dangerous reagents such as mercury compounds.

(2S, 3aR, 7aS)-octahydro-lH-indole-2-carboxylic acid
US-A-4691022 gives a synthesis of the above intermediate compound in relatively few steps but requires the trans-octahydroindole as the starting material. The result is also a mixture of the 2-α and 2-β compounds.

EP-A-084164/US-A-4, 933,361 provides an apparently effective method for the synthesis of the cis-fused intermediate beginning with the high-pressure hydrogenation of indole at 100 atmospheres of hydrogen and a platinum catalyst. This document also provides two methods for forming the trans-fused octahydroindole ring, but neither is indicated as being efficient. The first method provides the stereochemistry for the 2 -position from substituted alanine, reacting this with activated cyclohexanone and cyclising the product to give a hexahydroindole . Unfortunately, the reduction of this hexahydroindole to the octahydro- compound produces both cis- and trans-fused product in unknown yield. The second method is to introduce the trans-ring via trans-octahydro-lH-quinolin-2 -one, but no indication of yield in the key step is given and complex series of halogenation, partial re-hydrogenation and re-arrangement are required to reach the desired intermediate .

WO 00/40555 / US 6559318 relies on enzymic resolution of a 2- (2 ' , 2 ' -methoxyethyl) cyclohexamine with Novozyme7 over 25 hours to provide the N-acetylated (1R, 2S) enantiomer which must then be separated by column chromatography from the. unreacted (IS, 2R) enantiomer. Neither the enzymic resolution nor the chromatography steps are well suited to industrial scale preparations. There are also around ten steps required to reach the desired compound.

The synthetic route to the above octahydroindole intermediate proposed by Henning et al . (Tett. Lett. 24(1983), 5343-5346) quickly and elegantly introduces a 1,2-trans configuration around a cyclohexane ring, but requires the use of mercuric nitrate. The use of mercury compounds is obviously undesirable in the preparation of pharmaceuticals. A further synthesis is provided by Brion et al . (Tett. Lett. 33 (1992) 4889-4892) but it is unclear whether they in fact prepare 5% or 95% of the desired product with 2S stereochemistry. In any case, the method requires eleven steps including an initial pig liver esterase digestion to provide the product in stereochemically pure form but in a 95:5 mixture of isomers at position 2. This method is thus complex and ill suited to industrial scale preparation.

ROUTE A - Separation of enantiomers by the formation of diastereomeric salts with a chiral resolving agent HA* (such as 0, O' -dibenzoyl-L-tartaric acid), coupling with N- [1- (S) -ethoxycarbonyl-3-phenylpropyl] -L-alanine (ECPPA) derivative and finally deprotecting the carboxylic acid moiety Rλ (such as by hydrogenating a benzyl ester, where Rx = Bn) . 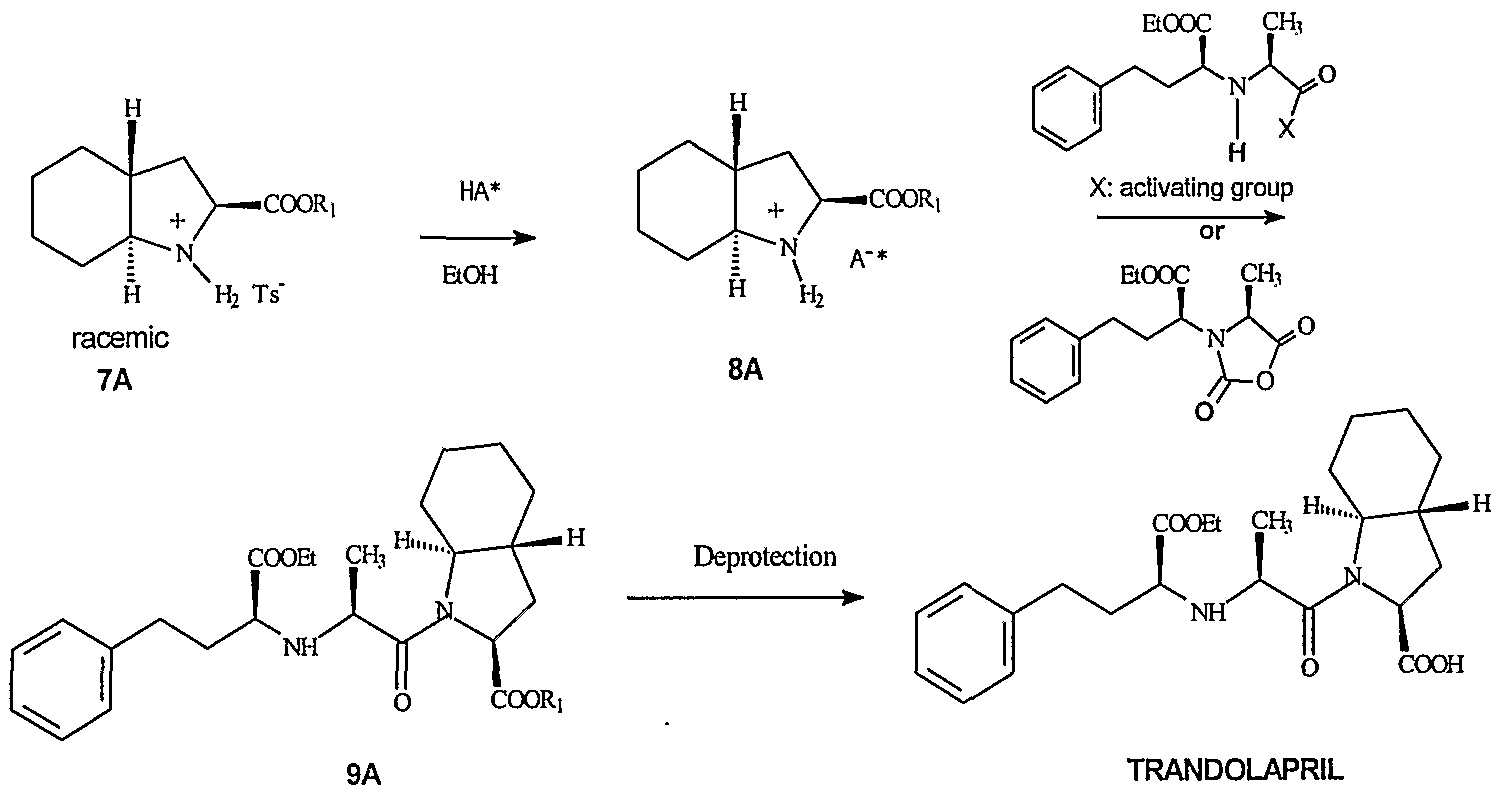 ROUTE C- Treatment of 7A in basic medium and deprotection that leads to the racemic mixture of octahydroindole acid followed by the reaction with ECPPA derivative. This will result in a diastereomeric mixture that can be separated by conventional methods.

racemic diastereoisomers 7A 6C
Route D. Separation of isomers of 6C by conventional methods (i.e. formation of a diastereomeric salt) and coupling with ECCPA derivative. 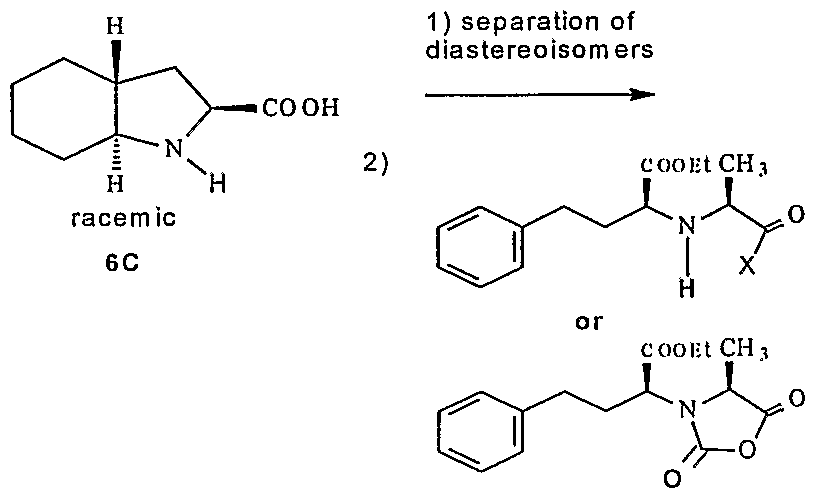 This route is an inversion of the steps of route B Firstly the isomers are separated and then the protecting group is removed. 1) separation of diastereoisomers trandolapπl

Route F. - The compound 8A is treated to remove the protecting grqup and coupled with an ECPPA derivative, Posted by DRUG PATENTS INTERNATIONAL at 18:51 No comments: 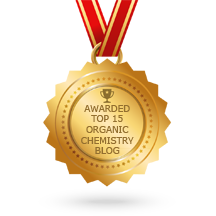 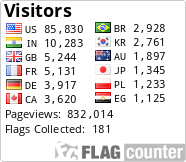 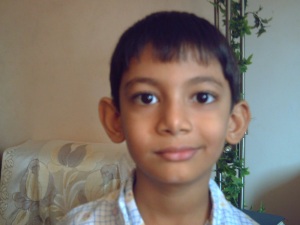